Right now rlsl is in a prototyping stage. It was important to me to implement all the necessary features to see if Rust would be viable as a shading language. And I can tell you right now that I didn't run into any major problems. Right now the code base is a bit messy, but there are a few things that I need to do before I can clean everything up.

I can not refactor the compiler without any test cases. Without tests I wouldn't know when I would run into some regressions. Testing is relatively simple with a little bit of macro magic.

Essentially what happens is that rlsl creates a new tmp cargo project. Every test function compiles into its own spirv module. The function is then executed on the on the cpu with the help of quickcheck. Then we run a compute shader with the correct SPIR-V module and compare the results. If any of the results differ we assert.

I usually run into one of 3 issues:

It is quite hard to read complex SPIR-V code because it contains GOTOs, so I wrote a very small tool that I call rspirv-cfg 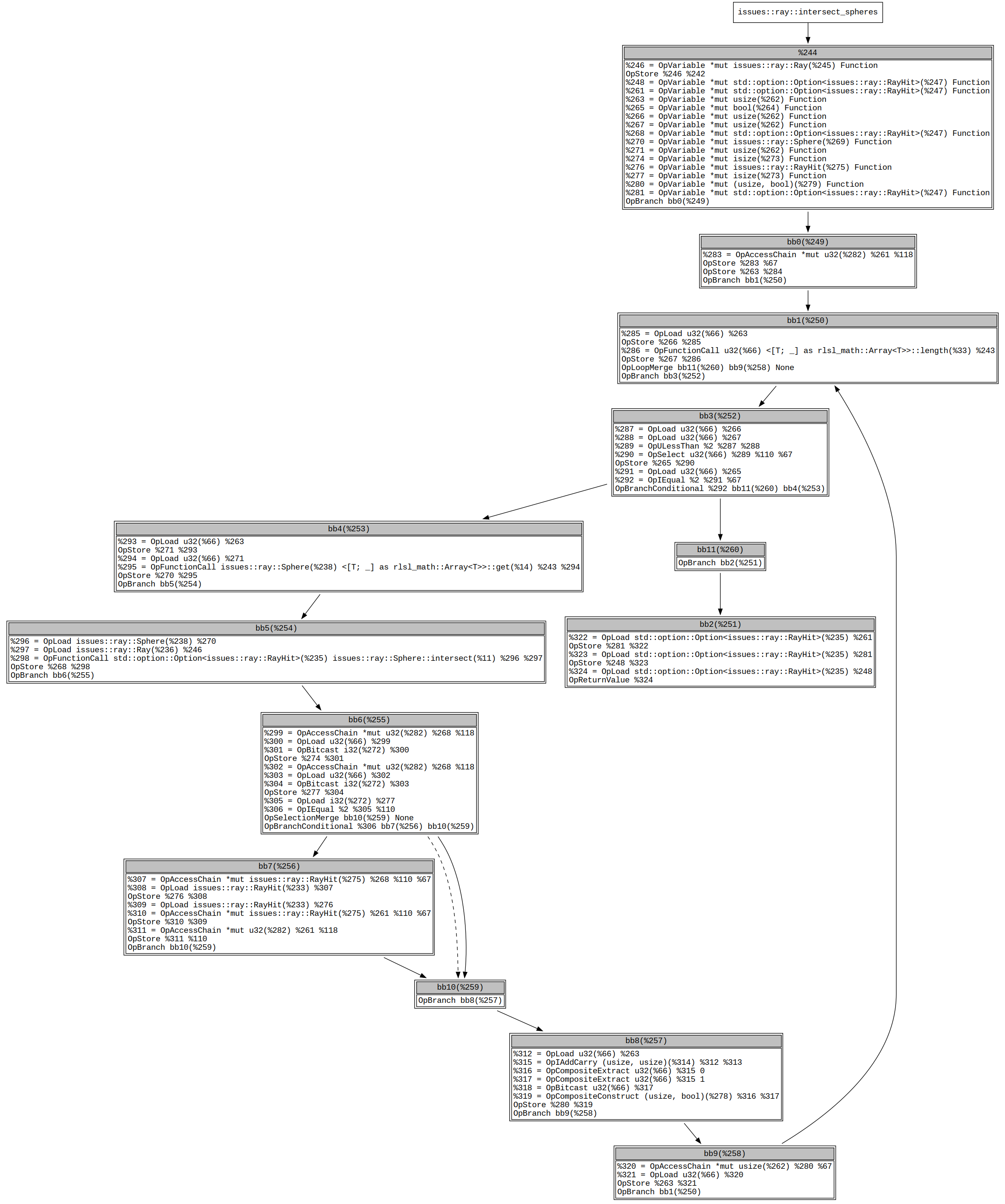 Essentially I display everything in a graph. Rust has a similar tool for MIR. I also slightly customized the textural representation, for example it will always include the id.

I usually spend most of my time reading faulty SPIR-V and this tool helps me to track down all the bugs.

SPIR-V requires structured control flow. Essentially this means that if you have a conditional branch, you need to tell SPIR-V where it will merge again. Sadly this is a little bit more complicated than I initially thought.

The main problem is that the spec is a little bit underspecified, which means I quite often run into some undocumented edge cases.

Additionally it often is not possible at all to reconstruct structured control flow because the MIR (CFG) already violates a lot of the rules that are specified by SPIR-V. For example the conditional branch has to dominate the merge nodes, and that is not always guaranteed. 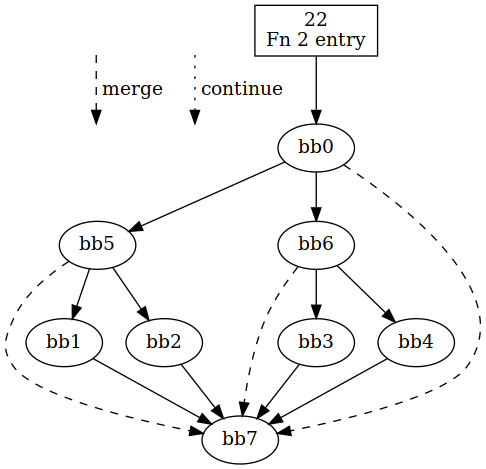 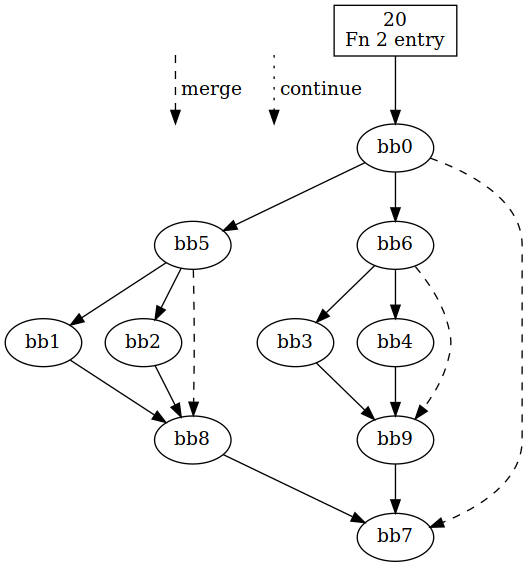 This is one reason why I want to focus on many test cases right now. I just don't have enough information to implement something that is 100% correct. Instead I try to find new test cases that will produce invalid SPIR-V and then I'll address those issues one by one.

Right now all of my transformations happen directly inside MIR.

Now I am toying with the idea of moving all of my transforms from MIR to SPIR-V.

Other projects could reuse this library to reconstruct all the control flow. This would make it much easier to generate SPIR-V in the first place.

The question that remains is if I should contribute this to spirv-opt or if I should create a new library based on rspirv.

Why generate SPIR-V in first place?

LLVM: No tools exist that generate vulkan compatible SPIR-V. There now exists a fork that structurizes the CFG. LLVM provides a rich eco system to transform the CFG.

DXIL: Very similar to LLVM, but sadly doesn't compile to SPIR-V. Afaik only HLSL can be translated to SPIR-V directly.

Cranelift: Can now be generated from MIR, I could have created a SPIR-V backend for it. Cranelift didn't do any optimizations when I started rlsl and so I didn't really consider using it over LLVM.

SPIR-V: Very easy to generate but misses a lot of optimizations if generated directly from MIR. Optimizations could still be possible with the bi-directional spir-v <-> llvm translator. Rust -> MIR -> SPIR-V -> LLVM -> SPIR-V. Additionally there is also spirv-opt. The real challenge is to structurize the CFG, which I had to do anyways.

I ended up generating SPIR-V directly as I felt this was the easiest way to get started. MIR can be accessed with #![feature(rustc_private)], and rspirv already existed at the time.

I am currently working on a shadertoy like framework for rlsl. Everything is still in flux but essentially you will be able to run a fragment shader on the cpu and gpu.

For example the following image was rendered both on the CPU and GPU.

It is quite useful to discover invalid SPIR-V code. For example I recently tried to port the raycaster to a raytracer, unfortunately I ran into some visual artifacts. It is quite hard to know if I made a logic error or if the SPIR-V is incorrect. Because I can run everything on the CPU, I can easily verify the results myself.

This will also be an excellent place to learn and experiment with rlsl in the future.

Integrating rlsl into an existing project

First of all please don't wait on rlsl. If you need to write shaders right now, use GLSL/HLSL etc. The first release of rlsl will focus on outputting SPIR-V. This means it won't do any magic behind your back, you specify every inputs / outputs explicitly and it will generate SPIR-V just as GLSL does.

rlsl should allow you to build more sophisticated tools on top of it at a later stage. Once rlsl has matured, you can start to replace each shader bit by bit.

You create a new crate foo-shader. You write all the shader code inside this crate. Every bin target will create a new spirv module. For example

SPIR-V does not have the concept of strings and debug just doesn't make any sense in SPIR-V. But it does make sense on the CPU, it would be unfortunate if you could not use Ray in rlsl.

rlsl will not depend on a specific math library, although it will ship with an optional one called rlsl_math. For example it is possible to mark types with a custom attribute.

This tells rlsl that this type should be an OpTypeVector. Porting existing math libraries like cgmath or nalgebra will be up the community. Up to date information can always be found in rlsl_math.

When will it be ready?

Everything is still in flux but my current goal is to remove all my custom compiler changes and focus on a specific nightly version. Installing should be as simple as cargo install rlsl. Using it is as simple as RUSTC=rlsl cargo build. rlsl will most likely require rustup.

If you want to help out, the best thing you can do is to experiment with rlsl and report any issues on the issue tracker. Especially helpful would be additional test cases. I'll add all the necessary guides on how to do that once rlsl is installable.

After I have set up a custom CI, I will start to accept PRs.

If you have any questions don't hesitate to contact me.