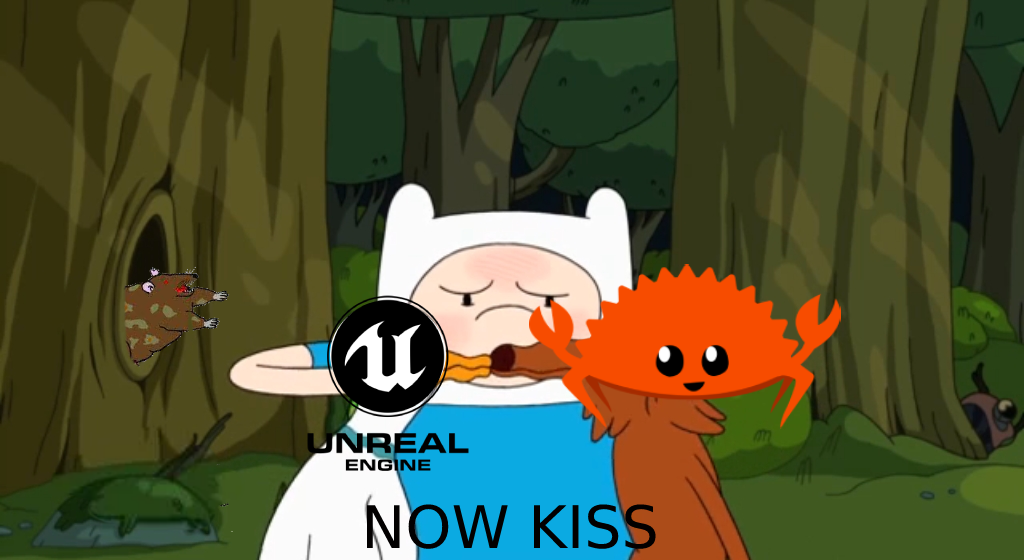 A few months ago I asked myself "What if I could write a game in Rust, but use Unreal as a renderer?". After a bit of thinking I came to the conclusion that exposing the Unreal renderer to Rust via C ffi was way more work than I was willing to do. But what if I could just build on top of Unreal instead? I could just move actors (Unreal gameobjects) around with Rust. That seemed much more manageable, so I sat down and hacked something up.

After a week I exposed a few functions that allowed me to get inputs, set and get the position of an actor. With this I could finally move a character around in Unreal 🥳.

While exciting, it was quite boring to watch. What if I could play animations?

For me that was quite magical. With almost no work, I could move a character around with Rust in Unreal.

But I wanted to do more than just moving around. I wanted to play sounds, do physics, have 3d pathfinding, spawn particles, create prefabs, do networking. This made me realize that I actually did not want to use Unreal just as a renderer, I wanted to use the whole engine. Why implement it myself if I can just expose a few functions?

TL;DR unreal-rust allows you to write games with Unreal Engine in Rust.

unreal-rust is an opinionated Rust integration for Unreal. Rust cares about ownership, mutability and lifetimes. Mapping Unreal concepts to Rust 1 to 1 would only cause a headache. Instead unreal-rust will be written on top of the Unreal AActor and expose its API in a Rust friendly way.

The first big change is that unreal-rust will use an Entity Component System (ECS). For unreal-rust I decided to use bevy instead of rolling my own. I am just a single developer and I have to pick my battles. Writing and maintaining an ECS would distract me from doing actual work. The folks at bevy have done a wonderful job of making the ECS user friendly 🥰.

I want to deeply integrate Rust into Unreal and everything should be accessible. You can add Rust Components to AActor in the editor. For example you can add a CharacterConfigComponent to the PlayerActor, which you can then access from within Rust. This allows to configure your character from Unreal without needing to touch any code. Additionally you can access Rust Components from within Blueprint. This allows you to drive Animation blueprints, or pass data into your UI.

Rust communicates with Unreal through C FFI. Its a bit out of scope for this blog post but I did a small write up to explain how it works in the unreal rust wiki.

To make your Components visible in the editor/blueprint all you have to do is to add the Component derive, give it a unique UUID/GUID (which your editor of choice can generate) and register it with register_components. And if you want it to show up in the editor, you can just mark it with #[reflect(editor)].

The component should be immediately visible in the editor and you can add it to any actor you want. Right now sadly it only supports a few primitive types like Vec3, Quat, f32, bool, and some assets like UClass and USound. I have plans to extend it to user defined structs, hashmaps, arrays etc and also add custom drawers like having a slider for an f32 instead of a input box.

Now you can add any Component to an actor in the editor. This essentially gives you a way to have prefabs. You can create a PlayerActor, give it the components you want, configure it and when you place it in a level unreal-rust will automatically register it and add the components to the actual Rust Entity.

Blueprint is Unreal's visual scripting system and it is heavily used in the engine. You can drive animations, materials, particles, sound, gameplay through it. It is important that unreal-rust can be used in Blueprint as well.

I added a new node called GetComponent(Rust), which gives you access to all of your Rust components.

In the video above I expose a MovementComponent which just contains a few fields like velocity, is_falling etc and is written to by the movement system.

This allows you to see your code changes in real time without needing to restart the editor.

Experimentation without crashing the editor

C++ has one big flaw in Unreal. You can easily crash the editor, either by triggering an assert or accessing a nullptr. This makes it quite difficult to experiment with the engine, especially if you are new. In Rust however crashes or panic are well defined and can be caught. That means if you ever unwrap an Option::None or do out of bounds access, unreal-rust will simply catch the panic, exit play mode and log the error to the console. It will never crash the editor.

What is the current state?

The current state is jank. Almost nothing is implemented properly and you should not use unreal-rust in a real project yet. I will list some of the issues here.

Now you add this component to an actor in the editor and save it. But a few months later you realize that a simple float for the gravity is not enough and you want a direction as well. So you change the type.

But now all the actors in your editor have the gravity as a f32, but they should become a Vec3 instead. How do you convert those?

Next someone in your project renames gravity to gravity_dir. How do you tell the editor that this field was renamed?

Next you decide to split gravity into direction and strength

Also the components can be accessed within blueprint: 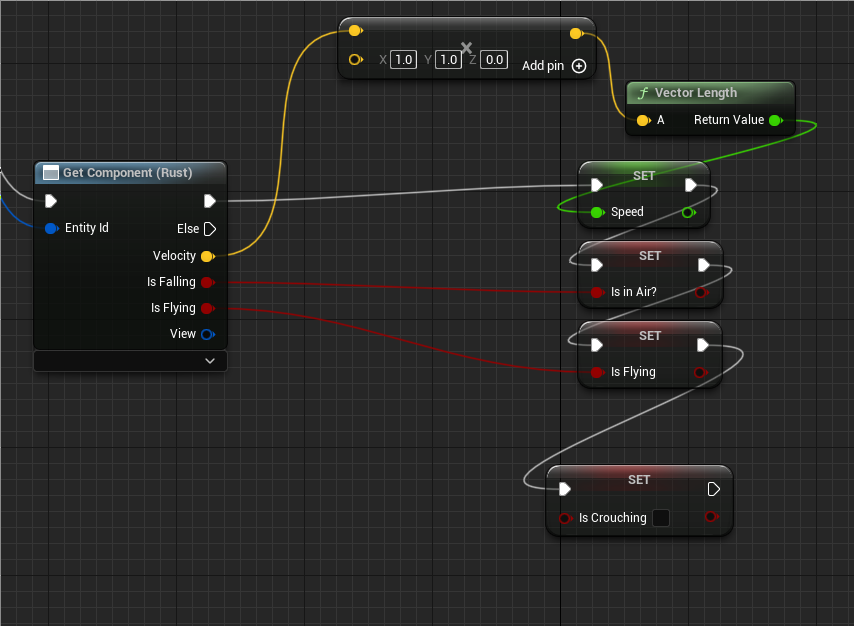 I could go on, but hopefully you get the gist. None of this is particularly difficult to solve, but it requires a bit of engineering. And before that is solved, I do not recommend to use unreal-rust in a real project.

I am loosely aware that Unreal Engine has similar issues and I still need to investigate how Unreal handles those cases itself.

Currently serialization is not implemented at all.

Usually the way to implement hot reloading is:

Because there is no serialization, we simply throw away the gamestate when loading the new dll.

I could simply use serde and call it a day. But serde does add quite a bit of compile time. I could use bevy_reflect and or mini_serde but I lose some of the niceties of serde like renaming fields and doing data upgrades.

TL;DR: I just haven't made up my mind yet of how serialization should work in unreal-rust and what problems it needs to solve. Losing gamestate during hot reload is not much of a blocker for myself.

While there are still a lot of problems, I do want to make unreal-rust into something real, it will just take a bit of time. There is an infinite todo list but the next big thing will be samples. I want to heavily drive this project through real world samples where I try to create some game mechanics like the Inscryption card game, God of War axe throwing etc.

There are a couple of reasons for that:

Quick thank you 🥰 to: